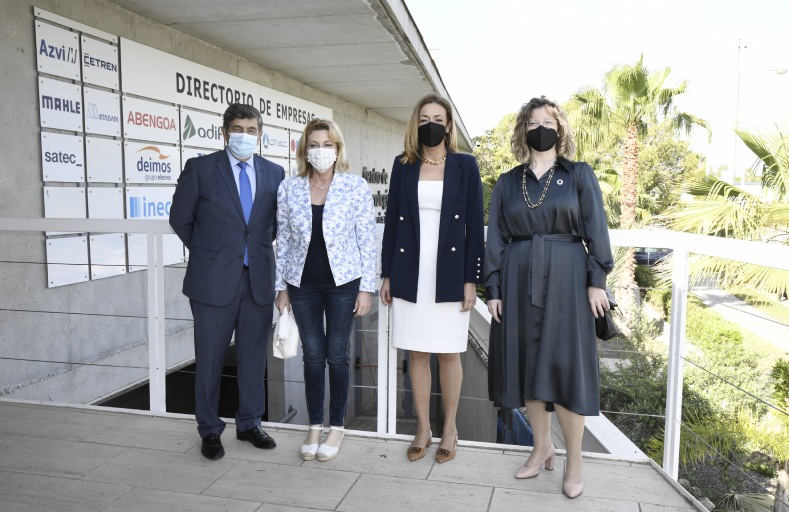 The Official Gazette (BOE) BOJA publishes the transfer of the building ‘Retse’ for a period of at least 10 years, the building located in Malaga TechPark, which also houses the cluster Railway Innovation Hub.

The Regional Ministry of Economic Transformation, Industry, Knowledge and Universities will establish new lines to boost R&D&I in the railway sector after ensuring the permanence of ADIF’s Railway Technology Centre (CTF) in Malaga TechPark. The BOJA (Official Gazette of the Andalusian Government) publishes today the transfer of the building where it is currently located, owned by the IDEA Agency, for a period of at least ten years. The Malaga TechPark is also home to the Railway Innovation Hub cluster, an international benchmark in railway innovation and high technology.

The permanence of Adif’s CTF in the province will reinforce the innovation ecosystem in railway technologies in Andalusia, as the general director of the IDEA Agency, María Rueda; the regional delegate of the Regional Ministry in Malaga, Carmen Sánchez; the director of Strategic Planning and Projects of ADIF, María Luisa Domínguez; and the president of Railway Innovation Hub, Juan Elizaga, have pointed out. During the visit, all the parties have highlighted the value of the railway sector as an area of specialisation of great importance for Andalusia, with important capacities to form an international reference area.

According to IDEA’s General Director, “this meeting confirms the unequivocal support of Economic Transformation to this railway cluster and the opening of a new phase of impulse and collaboration”. “We are confident, she pointed out, in jointly promoting new lines of work both with ADIF and with the companies that make up the cluster”.

The Centre for Railway Technologies (CTF) has been conceived as an open, multidisciplinary innovation space with a stable presence of research groups. At present, it has signed agreements for the provision of services with 21 companies, of which 21 maintain a continuous presence in its facilities: Alstom, Azvi, Cetren, Comsa Corporación, Deimos Space, Fomento de Construcciones y Contratas, Ferrovial, Abengoa-Inabensa, Indra, Ineco, NGRT, Renfe, Siemens, Sopra-Steria, Thales, Tria, Vías. Potentially, it has the capacity to incorporate up to 50 companies and more than 200 researchers in its facilities.

Located in the Retse building, the centre will be able to maintain its activity in Malaga thanks to the transfer agreement approved by the Governing Council of the Junta de Andalusia last March, which contemplates a first term of 4 years, extendable for 3-year periods up to a maximum of 10 years, upon ADIF’s request and after analysing the fulfilment of the conditions of the transfer, which include using the building only as headquarters of the Railway Technology Centre and the assumption of the maintenance costs by ADIF, among others. The railway company had requested to continue occupying the building to specifically develop R&D initiatives and projects within the framework of its Strategic Plan 2030.

The Railway Innovation Hub cluster is the only international benchmark in railway innovation and high technology. It has 90 associated companies and a technical office at the Railway Technology Centre. Its mission is to promote technology and knowledge in the railway sector. The cluster develops collaborative R&D projects, commercialises technology and know-how, promotes entrepreneurship and provides specialised services for companies in the sector. Among the initiatives it is currently working on are ImpulsoTREN 2030, GRail, Phygital Hub, Smart Train Smart, Air Andalusia, among other projects.