The innovative companies of BIC Euronova, based in Málaga TechPark, generate almost 300 jobs and a turnover of 25 million in 2021 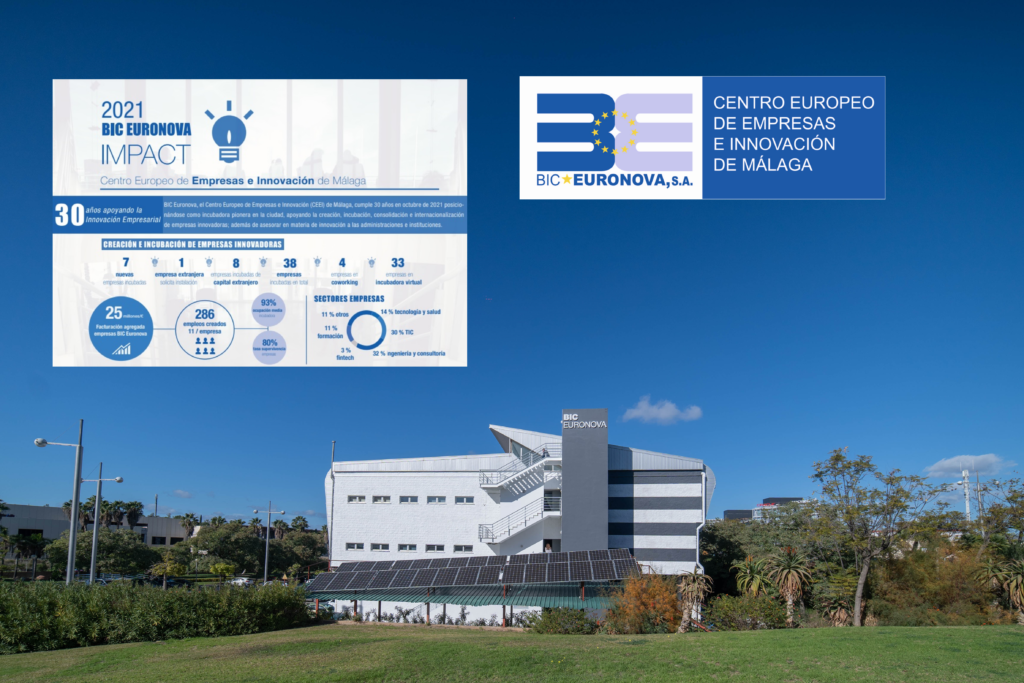 The innovative companies housed in the European Business and Innovation Centre (BIC Euronova) in Málaga, based in Málaga TechPark, generated a total of 286 jobs and an aggregate turnover of 25 million euros in 2021. These cumulative figures result in more than 5,480 jobs generated by the total of 514 innovative companies housed at BIC Euronova throughout its existence.

In 2021 BIC Euronova selected and welcomed 7 new innovative companies to its center, with a total of 38 companies housed in its facilities over the past year; 8 of them with foreign capital, to which should be added another 33 housed in its virtual incubator and 4 in the Coworking space. Thus, last year the average occupancy rate of BIC Euronova was 93%.

In 2021 BIC Euronova maintains the alliance with Byevolution Creative Factory for the joint management of “Keireitsu Forum Andalucía”, a brand granted by Keiretsu Forum, the largest international network of Business Angels. In this framework, last year it held two editions of “Keiretsu Forum Andalucía”, in which Andalusian startups presented themselves to more than 250 international investors for a private investment round.

In this sense, BIC Euronova is part of the Air Andalusia – European Digital Innovation Hub consortium, as well as continuing as a partner in Spain of the prestigious Skydeck accelerator of the University of Berkeley in the United States. It has also been approved as an International Soft Landing incubator by the US National Incubator Association (in Spanish Asociación Nacional de Incubadoras de EEUU) (InBIA).

Given BIC Euronova’s international vocation, in 2021 it continued its strong commitment to the internationalization of companies, thanks to the alliance it maintains with the European BIC Network (EBN), to which it belongs, and the various connections it has in other continents. In fact, it has a technical office in China to provide business services and attract investors. Likewise, 23 companies supported by BIC Euronova participated in international projects and another 2 were supported in softlanding services. At the same time, BIC Euronova promoted entrepreneurship in Latin America and continues to be an active member of the Grupo de Estrategia Internacional Conjunta (in English, International Strategy Group) (GEIC).

In terms of projects financed with European funds from different calls of the European Commission, BIC Euronova promoted a total of 4 in which it participated as a partner, including BIC For SME (training for business innovation), GOSUMP (sustainable urban mobility), EasyRights (access to rights for immigrants) and SME4SMARTCITIES (smartcities).

Since its foundation in 1991, BIC Euronova has held the EU|BIC is granted by the European Commission, through EBN (European Business Network), as a mark of quality in the provision of all its services. A mark, which was renewed in 2021 for five years and which offers a guarantee of compliance with the competencies linked to the performance of a European Business and Innovation Centre (BIC) or BIC (Business Innovation Centre).

In 2021 BIC Euronova continued to host the headquarters of ANCES, the Asociación Nacional de BICs españoles (In English, National Association of Spanish BICs), chaired by BIC Euronova’s CEO, Álvaro Simón de Blas, who also holds the Presidency of the Euronova Club, a club for innovative companies.

Furthermore, BIC Euronova offered a total of 12 training and mentoring sessions through webinars and free workshops, aimed at companies and entrepreneurs in 2021 to address current issues. This figure is in addition to the 25 business events organized and the 3 Technology and Innovation Breakfasts (Desayunos Tecnológicos y de la Innovación). Apart from continuing its commitment to innovation and entrepreneurship as a Jury in the UMA spin off awards, in which it has participated since its beginnings as a promoter. He also promoted the IV edition of ANCES Open Innovation, as well as acting as a jury member in the Emprendedor XXI Awards again in 2021.  He also continued to be active in promoting and participating in the activities of the Euronova Innovative Companies Club.

Finally, as Corporate Social Responsibility actions, last year BIC Euronova collaborated with Aldeas Infantiles, the Asociación de Artistas Plásticos de Málaga  (Association of Plastic Artists of Málaga) (APLAMA), as well as promoting a campaign of solidarity caps, participating in the InspirinGirls programme and being a partner of the EasyRights social innovation project.

After 30 years of activity, more than 4,500 entrepreneurial projects have used BIC Euronova’s services and the creation of more than 960 new companies has been supported. Directly, 514 companies have been incubated in BIC Euronova’s facilities for an average period of 2.75 years and with a survival rate of around 80%; generating and/or preserving 5,480 jobs. These figures reflect the importance of the role that BIC Euronova and the European Business and Innovation Centres  play in generating employment and wealth in general.

The sectors in which the companies housed at BIC Euronova operate are mainly Engineering, Consultancy and ICT (Information and Communication Technologies), although there are also different sectors such as Health, Biotechnology, Energy, Environment, Training and Fintech, among others.

Previous Post
The Andalusian Health Service and Dedalus, based in Malaga TechPark, promote a telemonitoring and telecare project for chronic patients
Next Post
AERTEC shows Its specialization in Aerospace and Defense Systems and Its Developments in Aircraft Electrification at ILA Berlin
Menu