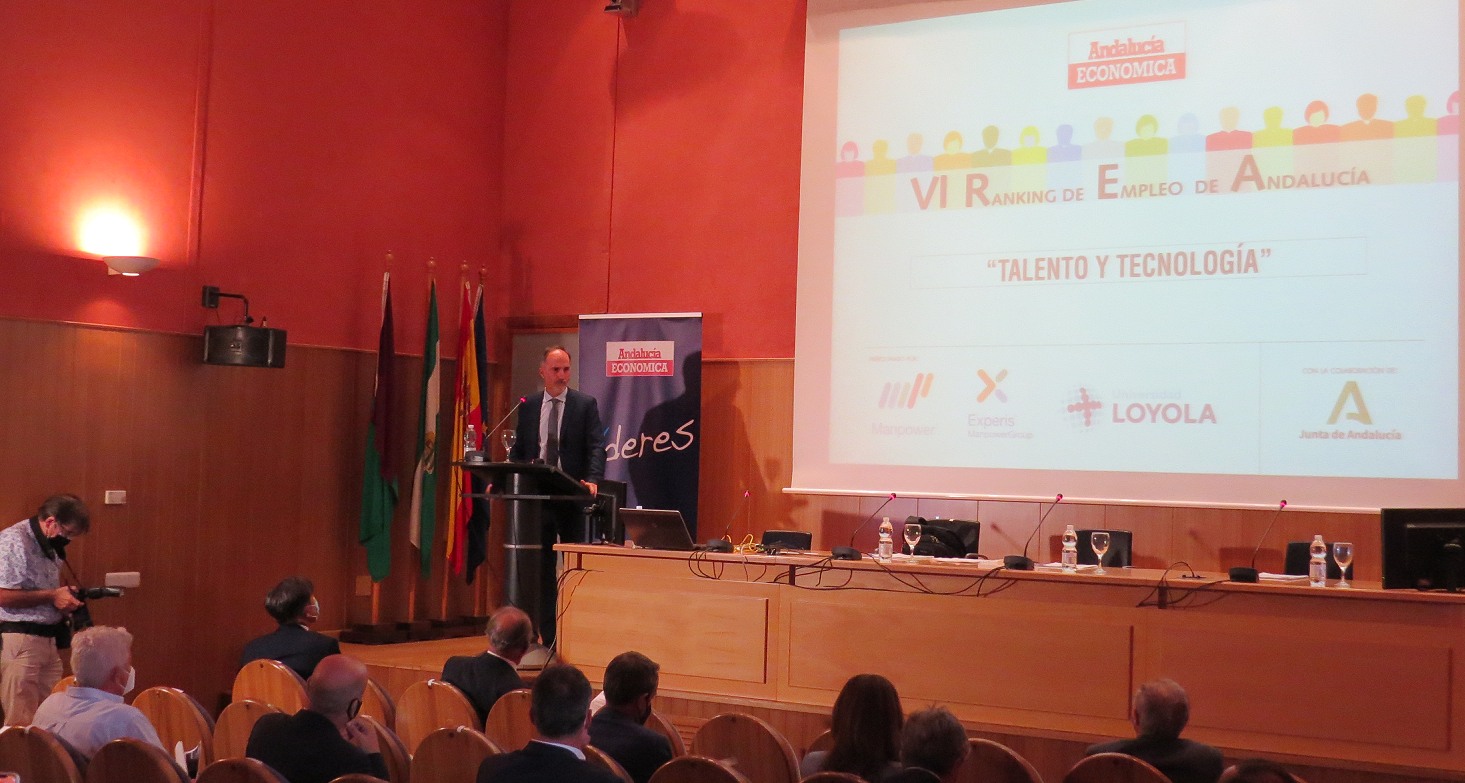 The event took place last 9th of September and was broadcasted via streaming from the auditorium of Málaga Techpark headquarters. The ceremony was headed by Rocío Blanco, Andalusian Minister of Employment.

The presentation of the VI “Ranking of Employment in Andalusia” took place in the city of Malaga last Thursday, September 9. This is the first ranking of these characteristics developed in the region and it has been sponsored by Experis Manpower Group and the Loyola Andalusia University.

The event, which was held at the Malaga TechPark headquarters, was presented by Alfredo Chávarri, general director of Andalucía Económica, and was chaired by Rocío Blanco, Andalusian Minister of Employment, Training and Self-Employment. Tomás de la Cruz, president of Andalucía Económica; Gabriel M. Pérez-Alcalá, rector of the Loyola Andalusia University; and Antonio Cardona, Manpower Group South Regional Director took part during the event.

The event was broadcast via streaming.

The Andalusian Minister Rocío Blanco closed the presentation of the Employment Ranking and recognized “the effort of all companies to maintain their workforce in these tough times of crisis.” The regional Minister of Employment made a brief review of the 300 companies that generate employment in Andalusia and highlighted the sectors that are best supporting the crisis, such as food distribution, agricultural activities or the financial field, and highlighted others who have suffered, “but in a less significant way compared to the others”, such as industry or information and communications. Finally, Blanco talked about the sectors much more affected such as construction, commerce, transport, hospitality or recreational and leisure activities.

During her speech, the Andalusian Minister of Employment pointed out that the economic consequences of the pandemic will continue to be felt in the coming years, which is why job creation is a challenge that “we must face in a shared way.” In this sense, Rocío Blanco insisted that “public administrations must be the catalyst for this joint effort, addressing it from the decision-making process agreed with the economic and social agents.” Blanco encouraged companies to take advantage of “a crucial moment in which Andalusia will determine its future”, because – he concluded – “if Andalusian companies do well, Andalusia does well”.

Andalucía Económica is a leading publication on economic development and the creation of businesses and employment. For this reason this job ranking has been created. Unemployment is one of the main concerns of the Spanish and Andalusia is one of the most affected communities by unemployment. But it is also true that there are companies in the region with continuous activity over time that create lasting and quality employment. The sixth edition of the Employment Ranking includes the 300 most employing companies in Andalusia. The figures published are the most recent and they have been mainly obtained through surveys carried out on the companies, although there are cases in which other means of information and their own sources have been used.

Most of the companies are Andalusian and, in these cases, the total workforce is provided inside and outside the region. However, there are also companies that are not Andalusian, but that are highly relevant in our region –identified with an asterisk–, and their employment in Andalusia is reflected in them.

The VI edition of the Employment Ranking is led by Mercadona –distribution–, which currently employs 19,384 people in Andalusia. In second place, there is Grupo Covirán –distribution– which has 15,746 workers. Sevillian Abengoa – engineering and construction areas of water, energy, transmission and distribution – follows in third position, with 14,025 employees. In this top ten of employer companies, Carrefour Group is in fourth place – distribution – with a workforce of 9,400 workers in the region. In fifth position, Grupo Ezentis –operation and maintenance of telecommunications and energy networks– employs 9,000 people; they are followed by the Post Office in sixth place with 7,653 workers. Malaga financial institution Unicaja Banco with 6,209 employees is placed in seventh place; in eighth place, Grupo Fissa –building and premises cleaning services– which employs 6,036 people; Ilunión Group – laundries, security, physiotherapy, catering, health, social health … – has a staff of 5,995 workers; and closes the top 10 employing companies in Andalusia Grupo Cooperativo Cajamar, with 5,406 employees.