Malaga TechPark and the Portuguese Embassy strengthen cooperation in innovation 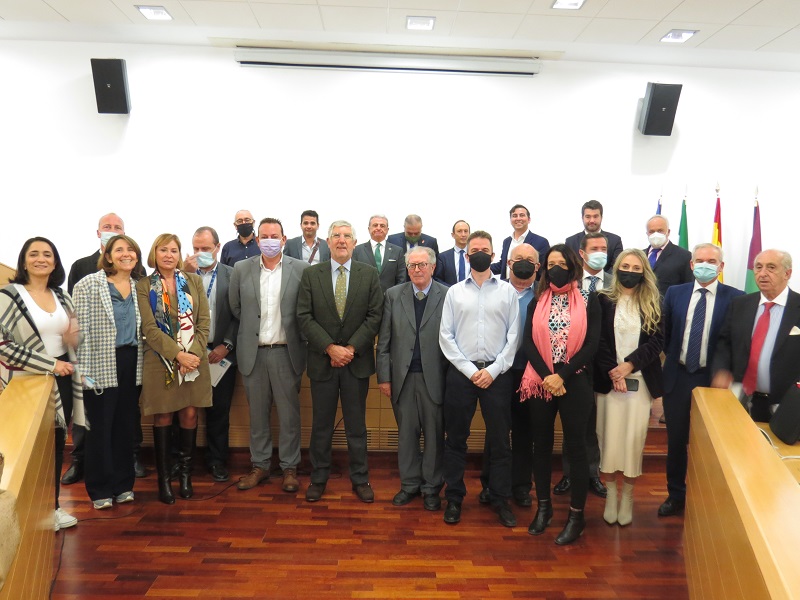 Last week, a Portuguese representation headed by the Portuguese Ambassador to Spain, João Mira-Gomes, visited Malaga TechPark together with João Queirós, Consul General of Portugal in Andalusia, and Rafael Pérez Peña, Honorary Consul of Portugal in Malaga, and held a conference working with its General Manager, Felipe Romera.

Felipe Romera briefly reviewed the history of the park since it was launched almost 30 years ago and has stressed the importance of the connection between the two neighboring countries: “We are living in a very sweet moment, with many opportunities, and one of the objectives is the cooperation of companies and Portugal, which for us is more than a preferred country, it is a friendly country with great collaborations. In fact, the APTE celebrates every year a meeting between the Spanish and Portuguese parks, twinning, getting to know each other and collaborating. We want to develop common policies between the governments of both countries for parks”.

Joao Mira-Gomes, Portuguese ambassador to Spain, highlighted the lines of action carried out from the Portuguese country and in which they would like to add the collaboration of Spain: “The management of green hydrogen or the connected car, as well as renewable energies and sustainable mobility in general, is one of the lines that interests us the most. We are also investing a lot in space technology and we would like to have a network of small satellites and work on it together with Spain. In everything related to digital, the two countries can have a position of great competition at the European level. The border has to be a space for cooperation, because borders no longer exist ”.

Currently, one of the most important lines of cooperation between both countries has to do with the connected car. A network of car chargers with a single card or corridors for these vehicles between Évora and Mérida, are some of these projects.

Innovation companies from the Malaga ecosystem were present at the meeting, most of them from the park, which have fostered international relations with various entities and companies in Portugal.

One of the most prominent examples is the company GlobalStar, a technology consultancy specialized in business strategies for the cryptocurrency market and the blockchain world. Installed in the The Green Ray (a center for global entrepreneurship, managed by UMA and Malaga TechPark) GlobalStar has recently decided to open a headquarters in Portugal, in the Algarve, where it already maintains relationships with the University of the Algarve and the Algarve Tech Hub.

Another case of a company that from Malaga TechPark is going to extend its presence to the neighboring country is Lynka, an engineering company specialized in sectors such as energy and telecommunications. Specifically, Lynka will soon open a delegation in a Portuguese park twinned with Málaga TechPark.

Malaga TechPark’s relationship with Portuguese innovation ecosystems is established day after day in multiple projects and collaboration initiatives, from the European projects in which the park is associated with Portuguese entities, to the numerous delegations of Portuguese institutions and companies that visit the park to learn about its management model and seek collaboration opportunities, without forgetting the Peninsular Network in Open Innovation coordinated by the University of Malaga together with Malaga TechPark.